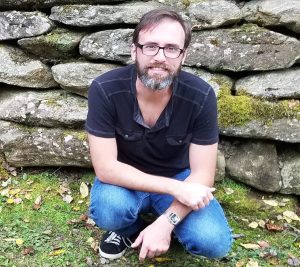 Rev. Jonathan L. Best, Ph.D, is a writer, teacher and the curator of Liminaltheology.org, a growing community of writers exploring uncertainty, transition and being in-between. His recent book is A Postmodern Theology of Ritual Action and he lives in Deltona, Florida with his wife, Rebekah, and daughter Ava.

“Perhaps” is the only way to say yes to the future.[1]

Over the last few weeks I’ve found myself thinking about how we define and describe liminality. One of the joys (and frustrations) about studying liminality is that it is difficult to define. Of course, part of this is due to the subjective nature of the liminal. It can be a deeply personal experience, thus one’s experience of liminality isn’t necessarily going to be the same as another’s. I think it’s well to note that the problem of subjectivity doesn’t belong to liminality alone. Anything that has to do with experience, religion, and spirituality is going to carry a degree of subjectivity—something of the personal that defies our scholarly attempts to define and explain with full certainty. And when it comes to liminality, I daresay we’re encountering an even higher degree of uncertainty than we’re (as religious and theological thinkers) even accustomed to. Perhaps (keep this word in mind for later) it’s the nature of liminality to be open and ambiguous. We might even say that the liminal is questionable and downright dubious. And as I see it, the liminal resists our efforts to define it. There’s always more going on, which perhaps (there’s that word again) explains why liminality has a certain allure to it. It entices us forward with a promise (and risk) of the yet-to-come. And as we step forward, crossing the threshold (sometimes unknowingly) into liminality, we embark upon a path that could lead to success, failure, or perhaps. . . something we never considered possible. It’s this idea of “perhaps” that I want to explore briefly.

Lately I’ve been fascinated by the idea of liminality as the place of “perhaps.” Well, “fascinated” might not be the most accurate word. I’m haunted by this seemingly insignificant adverb. I blame American philosopher John Caputo for that. In his book, The Insistence of God, Caputo uses “perhaps” to describe a radical opening to the present, one that “prevents the present from closing down upon itself, from being identical with itself, leaving it structurally exposed to the future, not the future present but the very structure of the to-come.”[2] In other words, “perhaps” represents the risk we take for the future. It’s the willingness to leave the safety of the known for the “fluid milieu of undecidability in which every radical decision is made.”[3] Caputo describes “perhaps” as a choice that abandons predictability, principle, and power for unpredictability, flexibility, and a weakness that haunts either/or thinking. Therefore, “perhaps” represents a kind of courageous hope in the promised to-come. A promise of what? Well . . . that’s the risk. “Perhaps” isn’t a risk for further certainty, trading one present for the next, but a risk that “unhinges us from the real, making the impossible possible.”[4] So in a sense, what Caputo is describing is an insistence that leaves us open to the impossible. “Perhaps” opens us to ideas and considerations we deemed improbable and even ridiculous. “Perhaps” opens the door so that we might take a risk, step forward, and walk across the threshold into unknown. And though we might recoil in fear, wishing to close the door, “perhaps” is a whisper that urges us to reconsider and keep ourselves open. It insists and causes us to wonder, “What if?”

“Perhaps” says it is possible when it is impossible, believes when it is incredible, still hopes even after hope is lost. “Perhaps” is a steely, indefatigable, resolute openness to what seems to have been closed off—while looking for all the world like a sleepy indifference. Perhaps is sly as a serpent, innocent as a dove, a lamb among wolves.[5]

Caputo’s use of “perhaps” is his way to describe what he often calls “the event of God.” For Caputo, God doesn’t exist, God insists. And God’s insistence comes in a way that disturbs those who prize stability, strength, and power. The event of God (God’s insistence), interrupts the normalcy of life, particularly in areas we perhaps (there it is again) believe to be safe and stable. God’s insistence upsets our future plans, lays waste to our carefully constructed systems (even theological ones), and shatters our expectations. God is the “possibility of the impossible” Caputo writes, which is “one of God’s most venerable biblical names, the proper referent, if there is such a thing, of “perhaps,” maybe even of God, perhaps.”[6]

I’ve been thinking about what “perhaps” means within the context of liminality. Speaking for myself, I’ve found “perhaps” as a particularly useful and meaningful way to talk about the liminal. Perhaps, “perhaps” is a great starting point for understanding something that appears to exceed and resist any of the conventional ways of describing religious and spiritual experiences? For when I think about the liminal, I conceive of an experience or a moment in life that immerses us in the unforeseeable future—one that’s calling us to respond to it. Calling us to what? That we can’t determine, but the call—the insistence—to go forward invites us to consider and appreciate that unknown. All the while, this insistence is changing us as we venture further and further into that liminal space. The further we move from one threshold to another, crossing one boundary to the next, the more remarkable that change becomes. Until, finally, we enter a new and wonderful (or terrifying) place of being. Hence, the risk of liminality. There are no guarantees that the future, the place, we find on the other side will be any better. Perhaps, it’s worse. But “perhaps” is too enticing, too alluring to ignore. It suggests that something, an impossible something we can’t quite see or even understand, is there at the boundary of experience. It’s the possibility of “perhaps,” what Caputo calls a “weak force,”[7] which prompts our own liminal imaginations and terrifies the strong forces of power and actuality. For “perhaps” is the hope of liminality. It’s the hope that situations might change, that old routines might give way to new ones, that our lives might bring forth new and exciting experiences. “Perhaps,” urges us onward even when “we have no chance, the odds are long, the chance is slim, the situation is dangerous and impossible.”[8]

I’m fully aware that I’m using one nebulous concept to describe another. The irony isn’t lost on me, in fact I find it a little amusing (in a mad sort of way). It seems liminality alludes and frustrates any attempt I make at explaining it. The closer I get to understanding it the more elusive it appears. There’s always a “perhaps it is like this or like that.” Part of me is glad about this. Defining liminality would be tantamount to enclosing it, placing walls around it that would eliminate the mystery. But more importantly, the liminal’s indefinability leave us open to the inbreaking of liminal insistence, which always seems to put before us another possibility, another pathway, another idea we hadn’t even considered. Sometimes it’s so subtle that it barely registers to us how momentous such occasions are. Indeed, oftentimes we’re responding and navigating moments, transitions, and changes in ways that we’re unaware of. I wish I could say that we’ll recognize when we’re in a liminal time, situation, or place. But more often than not, it’s only in retrospect that we can see (maybe only partially) our own experiences of liminality. And though we’re unawares, the barely there whisper of “perhaps” continues to urge us on, insisting that we let go when we want to hold on, to continue when we wish to stop, to have hope when it all seems hopeless.

Finally, whether we’re conscious of liminality or not, I’d like you to consider the possibilities of “perhaps.” It begins with living a life that’s attuned and open to the “what ifs” and “maybes.” It’s a state hopefulness when there appears to be no more hope. It’s a place of “letting go” what is and embracing what could be. Liminality, perhaps, is how we say yes to the future.