Veils, Loops and Paradox: The Nature of the Liminal Domain 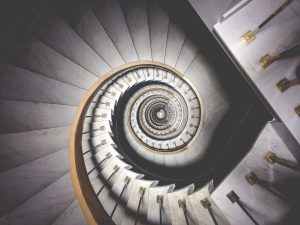 While some attempt has been made to describe the experience of liminality, we are often left with a list of what it is not: it is not familiar structure, it is not rational, it is not linear. The ambiguity and confusion we experience in this phase of the passage is often described by contrast, according to what it is not. That is understandable. It is much easier to describe the concrete than the abstract. And yet, a description of the liminal is very often what people desire most.

Before attempting to describe the subjective experience of liminal time and space, I want to have some conversations with a few physicists, mathematicians and philosophers.  If we are going to be talking about the disruption of our familiar order of life, the crossing of a threshold out of structure into antistructure, whether prescribed or imposed upon us, we need to explore the ground we supposedly stand upon.

When the late physicist Bernard d’Espagnat described reality, he spoke in terms of its veiling; ordinary observable reality – let’s call it the realm of Newtonian cause and effect – acts as a surface or veil for what is hidden beneath it.[1] If a theologian were saying the same thing the language might be “things visible and invisible,” a sacramental way of describing reality. Regardless, the reality we perceive is the surface of the pond, not the pond in all its depths.

We suppose this surface to be reliable and solid, something dependable and predictable. And to be sure, it often is. That’s how we can calculate that we are about out of milk, need to make a trip to the store, know a pathway there, remember transactions that will obtain the milk, and return home to drink it. Usually that is the case, but not always.

To make life easier our brains and social structures have created maps of predictability to keep this cause and effect surface easy to navigate. When people deviate from the pattern they are corrected. Mechanisms in our worldview keep the ball bouncing. Until it doesn’t anymore. Then, if we were a quantum physicist and not a Newtonian, we might say that it was only time until the house of cards fell, that we could only maintain this illusion for so long.

That, by the way, is exactly what most of the world religions have said for millennia, that what seems to be real is indeed illusion, that nothing is permanent save what buoys it up from beneath, that there is a difference between the essence of things and the form it takes in history. Or, returning to the physicists, that there is energy on one side of the equation and everything else on the other side.

So, there is only so much that can be known on a plane that is so unpredictable. For example, as every freshman physics major knows from Heisenberg and his Uncertainty Principle, one cannot know the velocity of a particle and its location as the same time. To know one is to not know the other.

All said differently, a mathematician-philosopher like Ludwig Wittgenstein would say that there is a difference between a mathematical proposition and reality as it actually is.[2] Propositions only resemble reality to a greater or lesser degree, and in every case, theory is not entirely equivalent to reality. The finitude of the human mind cannot exhaust the complexity and unpredictability of reality.

Though much is known, much more is unknown. And what is known is often the reflection of a surface which conceals more.

Douglas Hofstadter says nearly the same thing about those things which live beneath the surface, but with an intriguing analysis.[3] He says that the mind itself contains an amazing self-referential feedback loop – one that is paralleled by phenomena in the natural world and quantum realm. In his study of the mathematician Gödel, he found something reminiscent of Wittgenstein, namely, an Incompleteness Theorem in which all axioms include undecidable propositions. Neither a system nor absolute boundaries exist, except those which are humanly constructed in order to operate. Like the art of M.C. Escher with its paradoxical patterns, finitude and infinity are allowed to coexist, the known and unknown overlapping in intersecting planes. The loop is created by means of a pattern that has a beginning and an ending, yet no beginning and ending. It is at once finite and infinite.

All of this is to say that what we take for what seems to be obvious structure is but the appearance of the surface. When unveiled the undercroft contains deep patterns which unfold, replicate, and determine the shape of the visible by action of the invisible. What is revealed is an intertwining reality that holds the rational and irrational, finite and infinite, seen and unseen, structural and novel, conscious and unconscious.

Taken together, these insights shape our view of the Rites of Passage, and in particular our perception of the difference between structure and antistructure, the pre-liminal and the liminal.

When we cross a powerful threshold out of our previous structure into the chaos of what had slumbered beneath is surface, we are provided with a clear view of the illusion in which we once lived. In retrospect it is known for what it is – a veil which once concealed complexity and paradox we could not yet perceive. The transitions we make, therefore, are not only to a new domain, status, or stage of life, but rather to a new state of consciousness. Liminality is above all crossing a threshold into the depths of a consciousness yet to be revealed. Without that crossing we do not have access.

Because the liminal domain is characterized by the lack of structural foundations we once experienced on the surface, our movement through that space does not follow a linear pathway. The passage is often irrational and populated by strange coordinates, exhibiting paradox, shifting identity, and the fluidity and looping of time itself. The conscious gives way to the unconscious.

By way of encounter with this strange reality beneath the surface a new reality is created. It is not the same as the previous reality, though it may share some of the same previous form. The post-liminal state is shaped by the shattering of illusion, through everything that has been discovered in the liminal dark interval. And so, societies and individuals may be transformed. The spiritual depths inform the material world. Through many veils, loops and paradoxes we have already come. And old worlds die even as new ones are born.