Uncharted: How to Navigate the Future 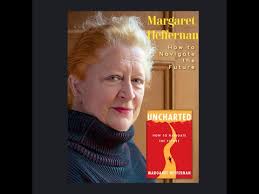 Margaret Heffernan does it again. If you have read other books by the Cambridge-educated entrepreneur and leadership guru you will already be primed for Uncharted: How to Navigate the Future. Her unorthodox conclusions are based on her own experience and the study of groups and leaders that responded with effectiveness in the midst of wild uncertainty. The derivative principles are applicable almost anywhere.

Despite all efforts to outorganize uncertainty and chaos, they persist untamed. The universe is far too unwieldy for mere humans to lasso them and whip them into manageable shape, which is why, for example, one never “defeats” nature, such as in pandemics. Though elements of history repeat, history itself does not repeat itself in its entirety; present manifestation is novel, based on context and billions of factors. One may take cues from the past but not marching orders.

That novelty and chaos explains, in one way, why our brains have developed with such adaptability, such plasticity. Those who survive and thrive continually adapt to primarily unknown and unpredictable occurrences. Rather than playing a part in a fixed, preordered plot, our stories need to remain open-ended, lest we become trapped by the stories we imagine from the past – stories that if enshrined as doctrine limit our ability to shift.

“Every generation of human being has lived with uncertainty and unpredictability; that’s how we developed our staggering human capacity for invention, discovery, improvisation, and creativity. Our ability to invent and explore came from necessity, not comfort.” (77)

This applies to the idea that DNA is all determinative. Though it has an influence on many things, genetics is but one influencer, more than balanced by environmental factors. Epigenetics is the elegant counterargument to notions of genetic determinism.

A more helpful way to orient oneself to the unpredictable and uncertain universe is the way of the artist. The artist makes meaning not by planning so much as by remaining open to the unfolding possibilities they see inside and around themselves. “This argues against forcing predetermined expectations and goals onto our experience of life and for an alert way of being, open to noticing and responding to the future as it emerges.” (155)

It follows that preparation for the future is more important than attempting to plan the future. That is especially true when it comes to addressing pandemics. The principles that inform a dynamic response to the unpredictability and uncertainty of pandemics are four:

The only way to prepare to such a scenario is to create flexible, responsible structures that are accompanied by a willingness to move nimbly, experiment, and adapt. “How much better we can think about the long term when we abandon dependency on prediction and accept uncertainty.” (247)

“All creative thinking about the future starts with experiments, feeling our way through a changing landscape, finding boundaries and contours. Bumping up against dead ends or discovering unexpected momentum, detail emerges and alternative scenarios start to coalesce: what else could be, what might be. More experiments reveal opportunity, advantages.” (260-261)

Heffernan’s insights deserve a place in the “what now” category of liminal existence. So very often people pass over a threshold into uncharted waters and wonder what to do next. All of the former coordinates have gone missing. The surface of that water is choppy. Old maps are rendered useless. But in the midst of uncertainty, unpredictability, and chaos a way forward may be revealed and found if we read the signs, respond to opportunities, and most of all take action, do something, which itself will reveal more. Whether in “our stars or in ourselves” those best equipped for the liminal domain are willing to see what is in front of them, navigate by faith, intuition, or conviction, and then take a risk, make an experiment, launch forward and then figure out what to do next.